Oregon Will Start Automatically Registering Voters. Is Vermont Next? 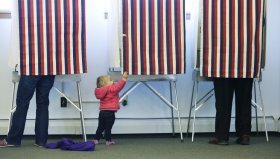 Officials estimate the new policy will add about 300, 000 more voters to the rolls right away, and could eventually reach cover nearly all of the estimated 860, 000 people currently unregistered but otherwise eligible to vote. Those who don’t want to register can opt out within 21 days.

Oregon’s newly sworn-in Governor Kate Brown said she was “absolutely thrilled” to sign the bill into law. “This is about making government work better, ” she said at the signing ceremony. “When someone moves to Oregon, why should they have to fill out multiple forms for multiple agencies? We have the tools to make voter registration more cost effective, more secure, and more convenient. Why wouldn’t we?”

The law’s enactment comes as states across the country explore ways to boost the US’ dismally low voter turnout, introducing bills to allow residents to register to vote online, cast their vote by mail, and restore the voting rights of felons who have served out their sentences.

“I challenge every other state in this nation to examine their policies and find ways to ensure that there are as few barriers as possible in the way of a citizen’s right to vote, ” said Brown. “Your vote is your voice and every single voice matters.”

One state ready to accept that challenge is Vermont, whose Secretary of State James Condos told ThinkProgress that an automatic registration system “just makes sense.”

“Voter participation among millenials is critical going forward, and we need to find ways to get them more involved, ” he said, noting that young men are still automatically registered for the draft unless they opt out. “If the Selective Service can do it, why can’t we?”

In a follow-up email, Condos said he’s currently working with Vermont’s DMV on upgrading their technology so that such a policy might be possible in the future, which he said would “benefit democracy in general as it will, most likely, increase voter turnout.”

Condos is also pushing state legislators to pass a bill currently before them that would allow same-day voter registration. A recent analysis of the 2014 midterm election found that states that allowed voters to register on Election Day had 12 percent higher turnout than those that did not.

Oregon already has one of the most accessible voting systems in the country, with ballots mailed to every registered voter that they can drop off anytime in the weeks leading up to Election Day. Governor Brown and other repeatedly stress that such voter access policies are non-partisan, as it benefits everyone to have higher participation rates.

But Republicans in the Beaver State, including Director Greg Leo of the Oregon Republican Party, disagreed. “We make it so easy for people to participate that I worry they won’t take the time to be an informed voter and to really study the issues, ” he said.

There has long been a perception that efforts to make voting more accessible disproportionately benefit Democrats, but as Colorado’s first all-mail election in 2014 proved, the pendulum can swing either way.

Though Oregon’s new system has won praise from voting rights advocates across the country, including the League of Women Voters, it only covers those who have gone to the DMV for a license or ID since 2013. Same-day registration is still not available in the state.

What is the last day for voter registration for oregon?

Your completed voter registration form must be postmarked by the 21st day before an election in order to vote in that election.

RT @Can_ada: I'm hearing many people are frustrated with @ElectionsCan_E registration and problems online have given up and won't be voting… Wed, 7 October 2015 03:03 AM