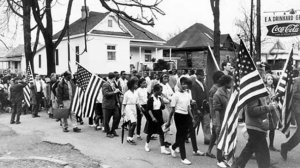 One of three Selma to Montgomery voting rights marches in 1965. The first march ended “Bloody Sunday, ” March 7, when state and local police used night sticks to halt the marchers.

Your right to vote is precious

Fifty years ago, only about one-third of WMU students were eligible to vote, and 100 years ago, almost none were.

Your right to vote is precious. Generations of Americans have labored long, and some have died, to secure the voting rights we enjoy today. I join President Dunn and other leaders of the University, and the Western Student Association and Graduate Student Advisory Committee in urging you to exercise your right and responsibility as a citizen.

Register to vote; study the candidates and issues carefully—be an informed voter; and on Election Day, go to the polls and vote.