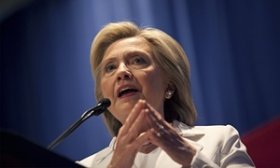 The NBC News/Wall Street Journal poll found that the former secretary of state was the first choice for nominee of 75% of her party, with Vermont socialist Bernie Sanders far behind on 15%.

Related: Clinton v Bush: America is getting the dynastic matchup it said it didn't want

Martin O’Malley, the former Maryland governor, was on 2%, while Lincoln Chafee, the former governor of Rhode Island, polled less than 1%. Former Virginia senator Jim Webb, who has not yet formally declared he is running, was on 4%.

According to the poll, 92% of likely Democratic voters said they could see themselves supporting Clinton.

The poll asked 1, 000 likely voters about their opinions on potential presidential candidates, both Republican and Democrat.

Against the Florida senator Marco Rubio, Clinton polled 50% against 40%. And against Wisconsin governor Scott Walker she polled 51% to 37%.

Among Republican primary voters, the poll showed Bush ahead with 22% of the vote. Walker was next with 17% and Rubio third with 14%. Retired neurosurgeon Ben Carson had 11%, while former Arkansas governor Mike Huckabee (9%), libertarian senator Rand Paul (7%), former Texas governor Rick Perry (5%), New Jersey governor Chris Christie (4%) and Texas senator Ted Cruz (4%) were all in single figures.

On Tuesday, Clinton urged businesses to stop selling images with the Conferdate flag on them, in the wake of the attack on a black church in Charleston

Republican pollster Bill McInturff told the Wall Street Journal that Clinton had “the strongest and most advantageous” standing among Democrats he had seen in 35 years of campaign polling. “She starts with advantages among very important groups, ” he said. McInturff conducted the poll with Democrat Fred Yang.

Clinton’s high rankings could be buoyed by increasingly positive support numbers for her 2008 rival Barack Obama, whose approval rating is up by 8 percentage points to 48% since September 2014, when it hit an all-time low of 40% according to the same polls.

Among Republican candidates, Bush and Rubio remain neck and neck, with 75% and 74% of respondents saying they could see themselves supporting the candidates in a Republican primary. Bush pulls away slightly in favorability rankings, pulling 5% ahead of Walker with 22%, and 8% ahead of Rubio.

Most see Clinton as a moderate candidate (58%) who is trustworthy because of her “experience and background” (59%).