Miami-Dade blocks voters standing in line from using the bathroom 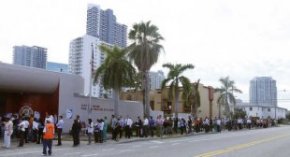 Hello, citizens of Florida. How can we help keep you from voting today?

Earlier this year, the Miami-Dade County Elections Department quietly implemented a policy to close the bathrooms at all polling facilities, according to disability rights lawyer Marc Dubin. Dubin said the policy change was in “direct response” to an inquiry to the Elections Department about whether they had assessed accessibility of polling place bathrooms to those with disabilities.

“I was expecting them to say either yes we have or yes we will, ” Dubin said.

Instead, he received a written response announcing that the county would close all restrooms at polling places “to ensure that individuals with disabilities are not treated unfairly, ” a January email stated. “[T]he Department’s policy is not to permit access to restrooms at polling sites on election days, ” Assistant County Attorney Shanika Graves said in a Feb. 14 email.

Note that due to the state of Florida's bang-up job of being generally incompetent at running elections, some voters in the county had to wait in line for six hours or longer to be able to vote in the 2012 elections. Now the state is going to intentionally close all the bathrooms near the polling places, supposedly because they can't be bothered to determine which ones are accessible to the disabled. Brilliant.

This would seem itself to disenfranchise voters with medical conditions that prohibit standing for six straight hours without a bathroom break, so I expect this will not be the last we hear of this.

No, they do not. Thanks for using