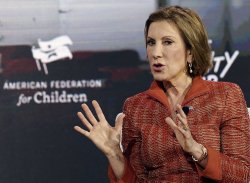 Hillary Clinton's email scandal might not be the only tech issue her campaign has to worry about. Her website just an an F grade when it comes to privacy.

She shouldn't feel singled out, though. The campaign sites for Donald Trump, Rand Paul, Ted Cruz and Bernie Sanders got an F mark, according to a report from the Online Trust Alliance.

The websites of 74 percent of the presidential candidates failed the privacy, security and consumer protection standards set by the alliance, which is a non-profit tech industry watchdog group.

"So you could have had a 100 in security, 100 percent in consumer protection, but if your privacy score was below 50, then you would have automatically failed, " said Craig Spiezle, executive director of the Online Trust Alliance.

The study says all the failures can be attributed to troubling privacy practices, such as sharing donors' personal information with others. Candidate Carly Fiorina's website at least tells donors their information is up for grabs.

"(Fiorina's campaign) actually disclosed they reserved the right to sell you information for fundraising or any other purposes, " Spiezle said.

"The candidates that passed made very clear that third parties may use their data for providing services but are bound by confidentiality not to share that data with any third party, " Spiezle said.

While their scores weren't perfect, seven candidates - including Jeb Bush and Chris Christie - had passing marks in the study.

HHH Meet the Candidates - Getting Information to Make ...

@livihouli: Hey does anyone know where I can find some information on the presidential candidates plans if they get elected? Wed, 14 October 2015 08:56 PM