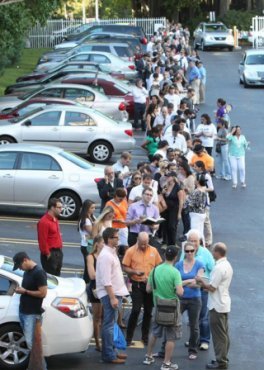 At long last, Miami-Dade County plans to finish drawing new voter precincts, a once-a-decade task that contributed to waits of up to seven hours outside the polls on Election Day in 2012.

Later this year, the Miami-Dade elections department plans to send updated registration cards to the county’s nearly 1.3 million voters. About 12 percent of them will find they’ve been moved to a different polling place, under a proposal scheduled for county commissioners’ approval Tuesday.

That’s far less than the 55 percent of voters Elections Supervisor Penelope Townsley said last year would be displaced in 2015. Her office redrew a minimal number of precinct boundaries — only the ones of the most crowded precincts — to displace as few voters as possible before the 2014 gubernatorial election.

Last year’s moves, coupled with the purchase of electronic voter sign-in devices and the expansion of early voting, proved more effective than expected, so Townsley’s department no longer intends to be as aggressive in redrawing the rest of the precincts. There were no embarrassing lines last November.

@destructeur d'etoile: Unless legalizing marijuana in California is on the ballot I ain't voting next year Wed, 14 October 2015 05:26 PM

@Bill Post: #motorvoter because the "barriers" to voting when you get ballot in mail are so huge. Oregon and now California are so dumb. Thu, 15 October 2015 04:54 AM