A new City Council bill would create early voting in the five boroughs. 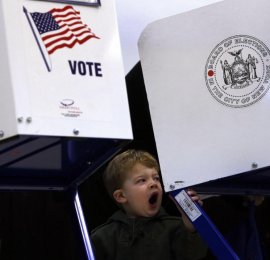 New Yorkers would be able to cast their ballots early under new legislation set to be introduced in the City Council Wednesday.

“New York is currently last in the nation for voter turnout, ” Kallos said. “And part of that is because two thirds of the United States and Washington DC offer early voting to residents, and New York doesn’t.”

Many people don’t show up at the polls because they’re too busy or can’t get time off work on election day, surveys have shown.

Under the bill, the city would have to open at least 51 polling sites - one in each City Council district - two Tuesdays before election day, for both primaries and general elections.

The measure would apply only to municipal elections for mayor, Council and other city offices, and not to state or federal elections.

Kallos said he hopes if the bill passes in the city, the state will follow suit. “The city has power over local elections, and my hope is that the city’s leadership on this will have an impact on the state, ” he said.