Booze on Election Day was an American tradition 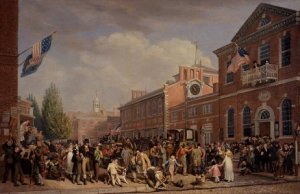 Today, all kinds of behavior is closely watched at polling places, and the very idea of holding large drinking parties as a way to sway voters would cause a media sensation.

Most states have changed their Prohibition-era laws to allow liquor sales on Election Day, but any kind of political partying today is mild in comparison to America’s past behavior.

Back in the days before Prohibition, political candidates and their supporters made sure the liquor flowed on Election Day as a simple way to turn out the vote.

In some cases, candidates held large parties in public places as people streamed into town to vote. One infamous Election Day party in Kentucky was attended by two local families who later gained an infamous reputation: the Hatfields and the McCoys.

But the tradition of offering drinks on Election Day preceded the Hatfield-McCoy brawl by well over 150 years.

In 1758, a young candidate in Virginia for the House of Burgesses footed a huge liquor bill to woo voters on Election Day. That candidate later became the first president of the United States, George Washington.

Washington spent his entire campaign budget, 50 pounds, on 160 gallons of liquor served to 391 voters. (Yes, the Founding Fathers drank heavily, especially when they had to vote.)

Buying votes with booze was already a custom in England. Washington also was following a Virginia tradition where barrels of liquor were rolled to courthouse lawns and polling places on Election Day.

The tradition of drinking and voting continued up to the era of Prohibition. Often, people working at the polls drank, as did voters. Sometimes, the polls were located inside saloons, which made imbibing more convenient for the men who were allowed in such places.

The strict control of alcohol consumption during Prohibition, at least in public places like the polls, made serving booze to voters problematic. State laws were also passed to restrict liquor sales on Election Day during Prohibition.

It took a long time for states to repeal the Prohibition-era laws about liquor sales, but only a handful of states currently bar booze sales while the polls are open. Most states frown on bringing any kind of food or drink into a polling place.

But some traditions die hard.

A former state representative in Arkansas now faces jail time for a scheme involving the exchange of vodka for absentee ballots.

“I guess I always knew all along it was wrong, but I really didn’t think it was that big a deal, ” Hallum said. “I always heard … that’s what everybody did.”