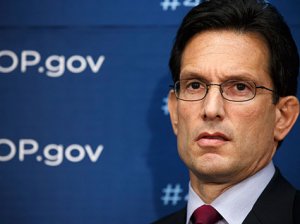 The poll also showed a sharp decline for Cantor when compared to his huge margin of 79 percent to 21 percent by which he beat challenger Floyd Bayne in the 2012 Republican primary. In the 2012 general election, Cantor defeated his Democratic opponent by a 59 percent to 41 percent margin.

Despite being outspent by $1.9 million to $123, 000 up to May 21, according to reports filed by each campaign with the Federal Election Commission, Brat’s focus on Cantor’s immigration record has sparked national attention on the campaign.

Even if Brat cleared 40 percent, the outcome would be embarrassing for Cantor, who, like in other cycles, has not taken the race lightly.

With the active support of conservative talk show host Laura Ingraham, Brat has been able to focus the national spotlight on Cantor’s immigration record, prompting Cantor to channel his inner anti-amnesty warrior over the last three weeks of the campaign.

Cantor’s campaign, which is expected to spend more than $3 million before the polls close, has flooded the television airwaves with commercials and mail boxes with direct mailers proclaiming him as a champion of opposition to amnesty. Brat has fired back that Cantor supports granting amnesty to illegal aliens brought to the U.S. as minors.

Laura Ingraham told Breitbart News in an exclusive interview on Tuesday that Cantor’s carefully couched language is a sign that he’ll back amnesty after the primary, despite his aggressive posturing now.