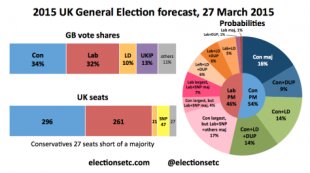 For the GB share of the vote forecast we are still using the same method we have been for over a year (described in this working paper). The main idea is to look at historical election results and polls and estimate how best to use opinion polls to predict future election results. Our small predicted rise in the Tory vote and corresponding 1-point drop for Labour are primarily due to this historical average pro-Labour polling bias.

Further out from the election we were also forecasting government recovery and opposition setback effects. Now we are so close to the election — and because both Labour and the Conservatives are polling not far from their 2010 vote shares — there is little historical reason to expect much swing back for either of the two main parties.

By contrast, the Liberal Democrats are predicted to recover a bit and UKIP fall back somewhat by the time of the election because their polling figures are still dramatically different from their 2010 levels.

The changes in Scotland are still more dramatic, with the polls showing around a 20-point swing from Labour to the SNP. We don’t have enough historical Scotland-only polls to apply similar models, but we have thus far used a swing-back adjustment estimated from GB models. We are now weakening that assumption, mainly because the changes in Scotland much more structural than simply part of an electoral cycle effect.

The major methodological change we have made going into the campaign is to model between constituency variation. This is done using Ashcroft constituency polls and individual-level data with constituency identifiers kindly provided by YouGov. The approach is similar to that used for modelling exit poll data, i.e. model the change since 2010 at the constituency level. This has been done for Scotland separately from England and Wales and precedence given to evidence consistent between both the Ashcroft and YouGov data.

What were the results of the election?

What patterns do u see in the ratio of states' D to R election results, Obama/McCain, like IQ, literacy etc.? | Yahoo Answers

States that voted for Obama are not under the influence of irrational, fundamentalist Christianity, and have a higher rate of shoe wearing and toilet paper usage. Next question.