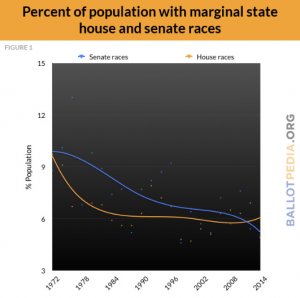 Fewer state legislative elections were hotly contested between Democrats and Republicans in 2014 than at any time in the last 40 years, according to a new study that offered more evidence of a historically polarized electorate.

The analysis of election results from last year found less than 5 percent of the U.S. population lives in a state House or state Senate district where the two leading candidates finished within 5 percentage points of each other.

At the same time, the number of races that don’t even draw competition is on the rise. Nearly a third of voters lived in state Senate districts in which only one candidate ran, while more than 40 percent lived in state House districts with only one option. Those numbers are far higher than four decades ago, when less than a quarter of residents lived in one-candidate districts.

“The American electorate has become increasingly polarized and partisan. People who identify with the same political party are more likely to live in the same geographic locale than they were in the past, ” wrote Carl Klarner, who conducted the study for Ballotpedia, an election results archive maintained by the Lucy Burns Institute.

Klarner also points out incumbents are winning at record rates. Last year, 96.5 percent of Americans lived in a district in which incumbents seeking reelection scored another term.

In many states, the figures suggest the growing influence of partisan gerrymandering, through which the party that controls a legislative chamber draws legislative boundaries that create safe seats. Even in some states where both parties have a say in the redistricting process, they collude to guarantee a smaller number of competitive districts.

But the trend of less competition extends well beyond state legislatures. Just 6 percent of races for U.S. House seats were decided by 5 points or less in 2014. And while contests for U.S. Senate seats are more competitive than House seats, only a little more than 10 percent of Senate races in recent years have been decided by a similarly narrow margin.

Given that gerrymandering does not impact Senate contests, which are decided statewide, the declining percentage of competitive races also suggests an increasingly polarized electorate, with fewer voters willing to consider candidates from either party.

All About - United States Senate elections, 2014