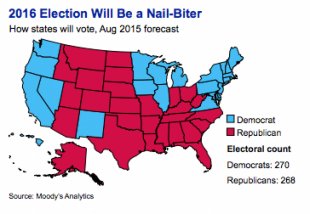 "The Democrats should win 270 electoral votes to 268 for the Republican, " writes Moody's chief economist Mark Zandi. "The key swing state to push the election to the Democrats is Virginia."

If the Electoral College result did eventually follow the Moody's prediction, it would be the closest margin ever. The only election in the modern era that even comes close to such a slim margin was in 2000, when George W. Bush won 271 electoral votes to 266 for Al Gore (and yes, we know, Bush lost the popular vote).

The Moody's model, which leans heavily on housing prices, real personal income and gas prices to produce its prediction of the political climate next year, gives the Republican nominee victories in many of the traditional swing states like Ohio, Florida, Colorado, Nevada and North Carolina. It speaks to the built-in Electoral College edge that Democrats carry these days that even winning so many of those states, Republicans will come up short if Democrats cans simply take Iowa, New Hampshire, Pennsylvania and, most problematically, Virginia.

How tenuous is Virginia for Democrats? Projects Zandi: "If President Obama's approval rating falls by any more than 2 percentage points by Election Day, Virginia will swing and the Republicans will win the presidency."

There's also a word of caution for both parties from the Moody's memo. "The model results are less valid if either political party nominates a non-establishment candidate, " Moody writes. "Elections since 1980 have been between candidates who are generally thought to be largely in the mainstream of American politics. Some of the current presidential candidates are more on the fringes of the political spectrum."

In other words: If you guys nominate Bernie Sanders and/or Donald Trump, all bets are off.

Take the 2004 map. Shift Iowa to Obama because of the ethanol vote. Done. Obama 263, McCain 275.
The only battleground states with any chance to flip vs. 2004 are Colorado and Nevada because of the Latino vote. Nevada alone won't do it for Obama, although Colorado will.
It's sad, but I've come to the conclusion that the country is so polarized that the Republicans could run Larry the Cable Guy and the Democrats could run Bill Maher and the election would turn out exactly the same way.
Hey Dave Holman, you have 10 votes more than you should. Did states 51-57 go for McCain even though …