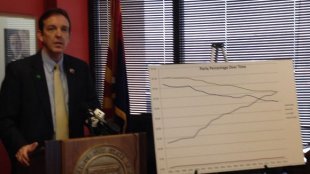 There is good news today for all of you Arizonans who scratch your heads and wonder how our beloved state became kook central.

There's good news for those of you who don't worry overmuch about the latest federal conspiracy or whether you'll burn in hell if you bake a cake for a gay couple.

For you who believe that compromise is a goal, not a traitorous act.

And growing every day.

"Independents have the opportunity to directly influence the direction of our state government, " Secretary of State/gubernatorial candidate Ken Bennett said Monday, in announcing that independents now outnumber both Republicans and Democrats.

Bennett's right. Independents can change things – if they want to, that is.

Surely, they should want to.

Sixteen years later, we're still waiting for them to show up.

In 2012, 43.5 percent of Republicans and nearly 33 percent of Democrats voted in the primary – the election in which most legislators and congressional representatives are chosen. Meanwhile, a pitiful 7.38 percent of independents cast ballots.

And you wonder why the Legislature spends more time listening to Cathi Herrod and her Center for Arizona Policy than to the rest of the state?

When I launched Operation Dekookification in 2012 - the search for a Legislature that is actually representative of Arizona - I heard every sort of reason why Arizona's one million independent voters are no-shows in the primary. Some don't realize they can vote. Others are offended at having to choose between a Republican and Democratic ballot, or discouraged by the paucity of choices.

What the 2012 Presidential Election Is Really About

2012 Presidential Election: What Else is on the Ballot ...

2012 Presidential Election: What Is the Number One Issue?
Related Posts