Can I vote in the primary Election?

Why Democrats can vote in Republican primaries… sometimes

Two weeks ago, Mississippi’s senior U.S. Senator, Thad Cochran, won the Republican primary runoff against Republican state Senator Chris McDaniel. Before the runoff, Cochran made explicit appeals to black Mississippians, who traditionally vote Democrat by large margins, to cross over and vote for him in the GOP primary as permitted by Mississippi state law. In the runoff, voter turnout increased by an average of 40% in counties with a majority black population–counties Cochran won. In other counties, the increase in voter turnout was much lower: about 16%.

After the primary, McDaniel claimed that that the Republican primary was “decided by liberal Democrats.” Since anyone, regardless of party, can vote for Republicans in the Mississippi primaries, no statistics are taken of voters’ party affiliations, but a Wall Street Journal poll and FiveThirtyEight’s analysis suggest that traditionally Democratic voters may well have boosted Cochran’s outcome. One pro-Cochran group’s ad in a Mississippi newspaper appealed to Democratic readers: “We’re asking Democrats to cross over and vote in the Republican primary to ensure our community’s interests are heard.” 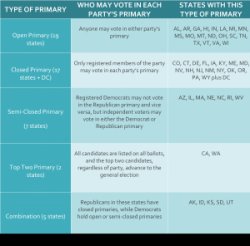 Mississippi is one of 27 states that allow people other than registered party members to vote in the Republican and Democratic primaries. Primary rules for Congressional elections vary widely by state, with four main types of primaries: open, closed, semi-closed, and top two. See the key below for descriptions of the four types, as well as the numbers of states with each type.

In 1996, a voter referendum changed California primary rules to create a fifth type of primary: the blanket primary. Under this system, all candidates were listed on all ballots, and voters were free to choose a Republican in one race and a Democrat in the next. The top vote-getter from each party on this blanket ballot advanced to the general election.

In 2000, the Supreme Court held that the blanket primary violates a political party’s freedom of association under the First Amendment, and California switched to a different system. Two years later, a Georgia Democrat who lost her primary attempted to use this Court decision to challenge to the open primary system, but the district court threw the case out, ruling that blanket and open primaries are two different systems. Open primaries, the court said, are legal because they require a voter to choose candidates from one particular party for all races.

Can Muslims Vote in The Elections of The Modern Secular ...

How can I vote in the Counterparty election? Version 2 ...

Latino voters on the candidates

@sashapdx I can't vote in America. Is your bday before the Oregon primary, or will you have to wait until general election? Sun, 11 October 2015 12:48 AM

RT @deejaylemur: #conflicted bc obvi bernie is the shit but is it reckless to vote for some1 in the primary who i dont rly think can win th… Wed, 14 October 2015 07:01 PM