Seasons Greetings: the history behind the Royal Christmas card 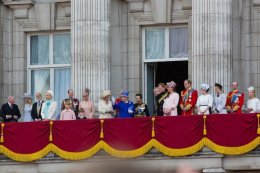 Sir Henry Cole fancied sending something different to his colleagues other than the typical Christmas letter. In 1843, he decided rather than writing individual letters which took some time and patience due to the amount of letters sent, why not task an artist to fashion some drawing in which he could send en-masse with a short note alongside. It was then – 170 years ago – that the Christmas card was born.

John Calcott Horsley was commissioned by Sir Henry to create the initial card. Horsley was an artist living in London at the time, and was somewhat established in his own right.

The original card was illustrated on both sides and featured pictures of the poor being fed and clothed. The centre of the card was a picture of a cheerful family partaking in drink and merriment at a Christmas celebration. The inside of the card read ‘A Merry Christmas and a Happy New Year to You.’

Of course, not everyone was keen on the cards’ illustration. The Puritans were upset at the people toasting and drinking to Christmas. Their protests though were ignored, and the card began to circulate among Cole’s colleagues. 1000 copies of Cole’s card were produced and sold for one shilling apiece.

Historians believe that the first card began in Germany a few centuries prior, but it was Cole’s card that began the time honoured tradition.

In 1851, Cole was one of the organisers of the Great Exhibition. He also founded the Victoria and Albert Museum in 1852 and was knighted for his contributions.

It was Queen Victoria who began the tradition as the first Royal to send holiday cards. The Royal cards usually portrayed the Royal Family in a portrait during that time. As the decades went on and the advent of photography became popular, photographs of the family began to appear on the yearly card.

The Royal cards would even make newspaper stories. In the 19 November 1927 edition of the now defunct Tasmanian newspaper The Mercury, a description about King George V card as well as Queen Mary’s card was published:

Where to print greeting cards for professional photographers in the uk? | Yahoo Answers

I'm looking for somewhere that prints greeting cards that you can offer to your customers once you've done a shoot - for example to make Christmas Cards. I don't have a great printer for this kind of stuff and so need to source elsewhere. I have searched and searched and so I know websites like...

How do you self-publish greeting cards in the UK? | Yahoo Answers

Sarah,
I have an indirect answer to your question. I am a distributor with Send Out Cards which is an automated greeting card system where you can create your cards online (using your great pictures) and hit send. The company then prints, stuffs, stamps and mails the card for you. It's a great product for many professionals, especially photographers. It's also a lucrative home business. If your interested in sending a few free cards on me, I would love to take you through the system. My email is joseph_merola@yahoo.com and my site is
Best wishes,
Joe Merola

@GoFrogYourself @max_olson That's fair. Unfortunate for the kid. But literally all that matters is nov 27th. The SOS card is so overused Tue, 13 October 2015 06:29 PM