What is on my ballot?

Hall of Fame: Braves' Smoltz, 7 others checked on my ballot 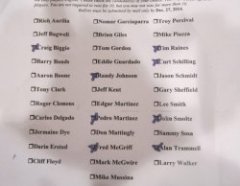 When baseball’s 2015 Hall of Fame class is announced Tuesday at 2 p.m., there is a good chance that the Braves will be able to fill out the top three of their recent pitching rotation in Cooperstown.

John Smoltz is among the strong first-ballot candidates this year, along with pitchers Randy Johnson and Pedro Martinez. All three were named on my ballot, as were five other players (see below).

Smoltz certainly is worthy of induction, a year after two of his former teammates, Greg Maddux and Tom Glavine, and manager Bobby manager Bobby Cox were honored. But the voting process is seldom predictable and some voters will look only at Smoltz’s win total (213) and not credit him for overcoming so many injuries and his late-career switch to bullpen (before switching back). But how can any voter penalize a pitcher who had 154 saves in just over three seasons and made the transition primarily to help out his team?

He’s also one of the greatest postseason pitchers in history: 15-4 with a 2.67 ERA, 199 strikeouts in 209 innings, a World Series title and a NLCS MVP Award.

I’ve been pretty consistent in my voting philosophy when it comes to the Hall of Fame. I won’t vote for players who used performance enhancing drugs, at least not before there’s some admission of guilt and clarity how it may have affected their numbers.

The criteria is different for each player. I don’t believe Mark McGwire or Sammy Sosa would have had HOF credentials if they played clean. I do believe Barry Bonds and Roger Clemens would have been Hall of Fame players without PEDs but I’m not moved to vote for either until they shed some light on their use.

The Hall of Fame voting process has come under significant scrutiny in recent years, and for good reason. For the last few years, I’ve considered giving up my vote and may still do so if clearer guidelines are not given. Honestly, the biggest reason I decided to vote this year was Smoltz’s eligibility.

With that, here’s how I voted.

• Those are the eight players I voted for: I consider all of them to have Hall of Fame credentials there also is no reason to believe they used performance enhancing drugs. The players: John Smoltz (first ballot), Randy Johnson (first pitcher), Pedro Martinez (first ballot). Craig Biggio, Fred McGriff, Tim Raines, Curt Schilling, Alan Trammell. Schilling’s career has been debated because his regular season numbers aren’t overwhelming (216-146, 3.46 ERA, though he had 3, 116 strikeouts) but he’s one of the greatest postseason pitchers in history (11-2, 2.23, three World Series, one World Series MVP).

• These are five players with HOF credentials I left off the ballot because of either admitted or certain use of performance enhancing drugs: Barry Bonds, Roger Clemens, Mark McGwire, Gary Sheffield, Sammy Sosa.

• Those with two players with HOF credentials I’m in holding pattern on: Mike Piazza, Jeff Bagwell. I may vote for them in the future but I’m using the full extent of the 10-year window allotted to a player’s eligibility on that chance more becomes of allegations of PED use.

The Rolling Stones - Time Is On My Side

Utah Phillips: My Body is My Ballot

Who else is on my ballot? - Trailer

RT @nbrempel: The liberal candidate for my riding has resigned but her name is apparently still on the ballot. What happens with the votes … Sun, 11 October 2015 08:33 PM