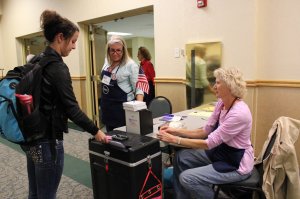 Midterm elections are underway, but some say without the aid of name recognition, midterm elections see a smaller turnout than those that decide the President. Groups like Vote Smart are trying to change that.

Morgan Levy is a CSU senior studying political science and economics and said young voters often do not vote because of time constraints and not knowing enough about the issues.

“College-aged voters don’t have a lot of time to research candidates and issues, ” Levy said. “It’s important for organizations like Vote Smart to bridge that gap so people feel confident about voting.”

“Political ads are marketing, just like anything else, ” Levy said. “It’s not fair for anyone to be manipulated by a political campaign that seems like it’s the right info, but is just trying to advance candidates for their own purposes.”

Angela Myers, the Larimer County clerk and recorder, said every single election is important, and citizens should vote and have their voices heard.

“It’s important for everyone of all legal ages to vote, ” Myers said. “It’s the foundation of our government.”

She said Colorado is an all mail-in ballot state now, but voters can register any time during the election at polling places, where they can also drop off their mail-in ballots. One of these polling places is the North Ballroom on the 300 level of the Lory Student Center located on the Colorado Sate University campus.

The New Era Colorado Foundation is another example of a nonpartisan nonprofit working to get young people engaged in politics.

“We believe democracy works better when more people show up, ” said Rebecca Lehman of New Era Colorado. “There will be record turnout this year and the election will be very close. Every vote will count.”

Lehman said that now that early voting has started, the foundation is working to ensure everyone registered to vote at CSU casts a ballot on or before election day on Nov. 4.

Right of Access to Information and Public Knowledge Panel ...