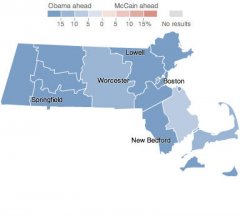 It should come as no surprise that liberal Massachusetts would vote overwhelmingly for Barack Obama, or that the state returned Senator John Kerry, a Democrat, to Washington by a margin of more than two to one in a race against Jeff Beatty, a Republican security specialist whose campaign never seemed to gain traction. This will be Mr. Kerry’s fifth term.

While there was little suspense in the electoral contests, ballot measures drew strong interest. Voters overwhelmingly approved a proposal to decriminalize the possession of small amounts of marijuana, 70 percent to 30 percent.

That ballot initiative reduces the penalty for being caught with less than an ounce of marijuana to a $100 civil fine, thus keeping offenders out of the criminal justice system.

Citizens of the Commonwealth cannot light up with impunity just yet, however: the initiative must first be reported to the Governor’s Council, which could take a month. Under state law, initiatives are then reviewed by the legislature and can be altered or even repealed.

What was the 2007 Heisman voting results?

What is the result of critical mass?

Critical mass is the amount of a given fissionable material necessary to sustain a chain reaction at a constant rate.