Jesse White Will Not Seek Re-Election As Secretary Of State 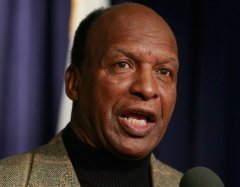 
It will be the end of an era in Illinois in 2019. Secretary of State Jesse White will not run for reelection again, he announced at the Illinois State Fair Thursday.

Reading White's impressive resume will exhaust you. Not only is he the longest serving Secretary of State in Illinois, he was a professional baseball player, served as a paratrooper in the Army's 101st Airborne Division, founded the Jesse White Tumblers, was an Illinois State Representative, served as the Cook County Recorder of Deeds and taught in the Chicago Public Schools.

"I've had over 16, 500 young people, " he said in the announcement. "I have a center at 412 West Chicago Avenue. It's called the Jesse White Community Center and Fieldhouse. It's a state-of-the-art gymnastics facility, game room, weight room, computer lab."

Visit to the Illinois Secretary of State in Elgin

Who is the secretary of state for Illinois?

Jesse Clark White (born June 23, 1934) is a Democratic American politician. He is currently the 37th Secretary of State of Illinois, the first African American to hold this position.