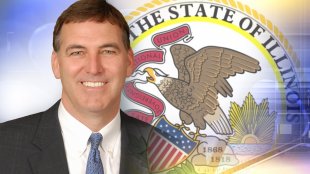 Illinois State Senator John Sullivan announced Thursday he will not seek re-election for the 47th district in the 2016 election.

Sullivan said Friday the decision to not run again was tough, but the timing was right.

"But I don't want to get to the point where it's not fun anymore and step down now while I feel good about everything, " Sullivan added.

When discussing his tenure as senator, Sullivan said one important focus was making sure farmers had a say in Springfield.

"Certainly agriculture is near and dear to my heart, " Sullivan said. "As the only farmer in the Illinois Senate, I've always looked out for their interest and made sure they had a voice at the table."

Despite the announcement, Sullivan said he's still focused on his current job.

"I still have a year and a half left and still have a lot of work to do, " Sullivan said. "We certainly have our budget challenges we're working on right now, so we still have our plate full."

Sullivan said he made the announcement now so people considering running for the seat can do their homework on the district before making a decision.
Source: www.wgem.com