Constitution Check: Will the Supreme Court’s future be an election issue in 2016?

Lyle Denniston, the National Constitution Center’s adviser on constitutional literacy, looks at talk about the Supreme Court’s future influencing the 2016 election, and what any potential candidates should really be considering in their public comments. 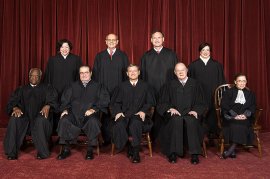 THE STATEMENT AT ISSUE:

“Despite various health issues over the years, Supreme Court Justice Ruth Bader Ginsburg insists that she is still of sound body at age 81 (her mind isn’t in question) and has no plans to retire before the end of President Obama’s term to ensure a Democratic replacement. If she keeps to that pledge, and presuming there are no other retirements in the next two years, the makeup of the Supreme Court should be a bigger campaign issue in 2016 than ever before. It certainly ought to be.”

– Columnist Paul Waldman, online at The Washington Post, on November 28, under the headline “Why the Supreme Court should be the biggest issue of the 2016 campaign.” (Justice Ginsburg, who had a surgical procedure for a blocked heart artery on November 26, was back on the bench on Monday – five days later – and took an active part in the hearings.)

WE CHECKED THE CONSTITUTION, AND…

The Founders who wrote the Constitution were well aware of the problem of “factions” in a self-governing republic, but it likely was beyond their comprehension that America would become as deeply polarized in its politics as it is more than two centuries later. So, when it gave both the president and the Senate important roles in putting judges on the Supreme Court, it probably assumed that it was creating a system to get the best people selected, and did not anticipate that the process would become thoroughly politicized, with the nominees’ merit sometimes seeming to be a secondary issue.

Times certainly have changed. For much of the past two years, political analysts have been wondering when there would next be a vacancy on the Supreme Court, and how that would figure as the nation anticipates the choice of a new president in 2016.

Much of the focus of speculation has been on the court’s oldest member, Justice Ruth Bader Ginsburg, who will reach her 82nd birthday next March. In fact, liberal or progressive commentators have been attempting publicly to pressure Ginsburg to step aside, to give President Obama a clear opportunity to find a replacement for her before he leaves office in January 2017.

The focus on Ginsburg intensified in recent days, as she underwent a hospital operating-room procedure to open a blocked artery in her heart. It was the latest of a series of medical challenges that she has faced in recent years, and overcome – so far, not yet having called in sick to miss a day on the bench. But her resiliency has done nothing to quell the rather widespread expectation that it will not be much longer before one or more of the nine seats will be vacated, by retirement or otherwise.

With Ginsburg’s repeated public assurances that she is not yet ready to step aside, and with no indication that any of her colleagues is planning to retire, the speculation is leaping forward to 2016, when a new president will be chosen with a presumed opportunity to reshape the court, perhaps even during a first four-year term in the White House.