Did this polling company predict the correct General Election result 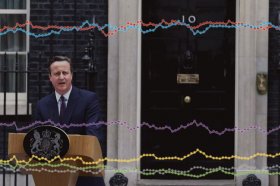 Damian Lyons Lowe, the CEO of Survation, says he “chickened out” of publishing results that would have given the Conservatives a six-point lead over Labour, and which was very close to the final result:

The poll was carried out with three specific attributes:

But Lowe goes on to say that “the results seemed so ‘out of line’ with all the polling conducted by ourselves and our peers – what poll commentators would term an ‘outlier’” that he decided not to publish. A decision he says he is sure he will always regret. He titled his blog post “Snatching defeat from the jaws of victory.”

He concludes that: “Online polling is very effective and useful for a wide range of reasons, however we’re now clearer than ever that this method of telephone polling as described above will be our ‘Gold Standard’ for voting intention going forward.”

READ: General Election - Why were the polls so wrong?

The governing body of polling companies yesterday launched an inquiry into why pollsters got their predictions so badly wrong.

The British Polling Council(BPC) said there was an "apparent bias" in the final opinion polls before the election, and they plan to set up an independent enquiry to look into the causes and make recommendations for future polling.

The 2015 general election was supposed to be the closest in years.

Polls suggested Labour and the Conservatives were neck-and-neck for months during the campaign - with every major opinion poll putting the two parties within 1% of each other right up to election day.

When polls closed, broadcasters' released their official exit poll, to widespread disbelief. It suggested the Tories had a much bigger lead than expected, and the Lib Dems were going to be decimated.

@BillKristol Saving this one to retweet on Election Day. Your predictions are always wrong! Fri, 9 October 2015 02:10 PM