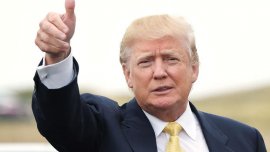 Trump may be the top choice among a quarter of Republican primary voters, but there are other voters who would be less enthusiastic. At 27 percent, he tops the list of candidates Republican voters would be most dissatisfied with as the party's nominee.

Trump, Bush, Walker and Rubio are all viewed more positively than negatively, but Trump has the highest unfavorable ratings. His ratings among registered voters overall are especially negative.

Majorities of Republican primary voters are confident in Trump, Bush, Rubio and Walker to handle key issues. Trump does best on the economy and illegal immigration, while Bush does best on dealing with America's adversaries. Trump and Bush are seen as the candidates most likely to win a general election.

Among Trump supporters, the most popular second choice candidates for the Republican party's nomination are Carson, Bush, Cruz and Rubio.

Trump and Bush are also seen as the most electable in a general election. At this early stage of the campaign, 26 percent say Trump has the best chance of winning in November 2016, and 23 percent pick Bush as having the best chance. Walker comes in third here, with eight percent.

BJP to be biggest party in 2014 election: Opinion polls

RT @RobinHDunlop: Perusing #elxn42 polls this a.m. Current polls are baffling but is it really that close? It's a fascinating election camp… Fri, 9 October 2015 02:39 PM