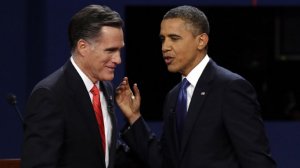 FILE: Oct. 3, 2012: Mitt Romney and President Obama talk after their debate at the University of Denver, in Denver. (AP)

Romney had a razor-thin 46-45 percent edge earlier this month, after the first presidential debate (October 7-9).

Interviews in areas affected by Hurricane Sandy were completed before Monday evening, when the hurricane made landfall.

There’s a gender gap in vote preference, as men back Romney by 51-42 percent, while women side with Obama by 50-42 percent.

Among the subgroup of most interested voters, those who are “extremely” interested in the election, Romney leads Obama by 53-42 percent.

And consider this: Fully 82 percent of Romney supporters say this year’s election is more important than the 2008 election. That’s 16 points higher than the 66 percent of Obama supporters who say the same.

Overall, 73 percent of voters feel this year’s election is more important than 2008.

Some good news in the poll for Obama is that nearly half of voters - 46 percent - are satisfied with the way things are going in the country today. That’s up from 31 percent two years ago, right before Republicans swept the midterm elections (October 2010).

In addition, by a slim two percentage-point margin, more voters think the economy is getting better than getting worse (45-43 percent).

The Romney campaign is focused on the 53 percent of voters who are unhappy with the way things are going in the country today, and the 50 percent who agree with him that government is too big.

Meanwhile, over half of voters - 55 percent - would like to see all or part of Obama’s health care law repealed - something Romney’s said he would do on “Day 1.”

Election 2012: Fox News Channel after his own network ...