As an addition to the data provided below, results from our presidential poll tracker from Monday, 11/5 indicates that Virginia has gone blue in all three of our models. Also, our raw model now matches our model that is weighted on “how” we sampled. Our “who” model is still bluer than both the others.

Updated expected electoral totals and popular votes are below along with the remainder of results.

At some point, there isn’t any more data to collect before an election—it just needs to happen.

Estimating election results is a complicated business—as you can probably tell if you’ve watched the pundits squirm and speculate over the past few weeks. They throw around terms like “margin of error” and “dynamic weighting” and disagree with each other vehemently. 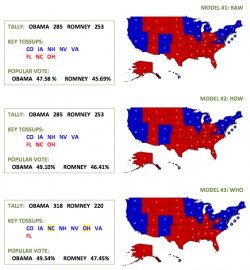 But at the end of the day, there is only one right answer.

First, a few disclaimers about what might bias an online poll of election results…

So, newbies that we are, we have hedged our bets a little bit, and created three different models to estimate what will happen on Election Day.

On #IndiaHangOut 2015 Delhi Election Tracker In ...

I usually go to Fox News and several Catholic News agencies. Thanks for sharing this one!