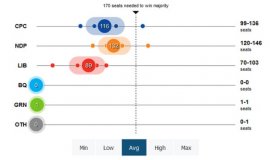 The past two weeks of the election campaign have been marked by competing headlines from the trial of Mike Duffy, forcing Conservative Leader Stephen Harper to answer questions on a nearly daily basis about what his office knew of a deal to repay the senator's expenses.

Two new polls suggest that the Conservatives could be hurt by the fallout from the Duffy trial among the electorate they need most: swing voters.

Polling by Abacus Data and Angus Reid Institute, the latter released on Friday, show that about one in four Canadians are following the trial closely. Though that leaves a lot of people who are paying little or no attention to the trial, it is a safe bet that the vast majority of these interested people also happen to be voters.

The numbers are not positive for Stephen Harper: 15 per cent think he acted properly according to Abacus Data, and just 20 per cent believe Harper's version of events according to Angus Reid. In that poll, 56 per cent said the trial had worsened their opinion of the Conservative leader.

But many of these voters have already decided they will be casting a ballot for the Liberals or the New Democrats. And few decided Conservative supporters have been negatively influenced by the trial. What is more ominous for the Tories is that a significant proportion of soft Conservative supporters — people who are currently considering voting for the party but have not yet committed — are looking at Harper's involvement in this affair with doubt.

According to Abacus Data, a quarter of soft Conservative supporters think Harper acted improperly, and one-fifth say the trial has made them less inclined to vote for the party. About one-quarter of these swing voters told Angus Reid they did not believe Harper's story (another 42 per cent said they did not know if they believed Harper or not), and just under one-third said it had worsened their opinion of him. In a tight three-way race, that represents a lot of votes the Conservatives can ill afford to lose.

.@irishspy Fla is strange in many ways. And it determines the Electoral College results every cycle. Sun, 11 October 2015 02:50 PM