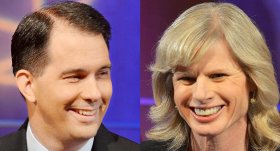 Just two weeks ago, the same poll had Gov. Scott Walker up 5 points.

The Wisconsin governor’s race is again a dead heat.

Just two weeks ago, the same poll — considered the most reliable survey in the Badger State — had Walker up 5 points, 50 percent to 45 percent.

The electorate is divided roughly equally between Republicans and Democrats. Independents make up about 40 percent of the sample.

Two weeks ago, 67 percent of independents said they were likely to vote. In this poll, it is 80 percent.

If independents turned out at the rate they said they would in this poll, then overall turnout would exceed both the 2010 election and the 2012 recall. That seems unlikely, and the feeling among insiders on the ground is that Walker retains a slight-but-significant lead.

“We’re not nearly as sure about whether these independents will stay the way they are, ” said Franklin during an hourlong program on the law school’s campus in Milwaukee.

The final debate of the tied race is Friday night. The White House said Wednesday that President Barack Obama will come to campaign for Burke in the final days. The president’s approval rating in the poll is near parity: 47 approve of the way he is handling his job, and 49 percent disapprove.

There has been a significant shift in views about gay marriage even since the spring; just last week, the Supreme Court in effect made same-sex marriage legal in the state. The new poll shows 63 percent approve of gay marriage, a 10-point rise since May.

On another contentious issue, a 58 percent majority supports voters being required to show ID to vote, according to the poll. In another high-profile ruling last week, the Supreme Court blocked the state from implementing its photo-ID requirement this fall. Justices did not rule out the constitutionality of it but rather stayed a ruling that would have allowed the law to take effect before Election Day.

The poll found that more Wisconsinites want Rep. Paul Ryan to run for president than want Walker to. Only one-quarter of likely voters want Walker to seek the GOP nomination in 2016, and 70 percent do not. Compare that to 40 percent who want Ryan, the 2012 vice presidential nominee, to run and 52 percent who do not.

Tracking the elections: Race for governor in Wisconsin
Related Posts