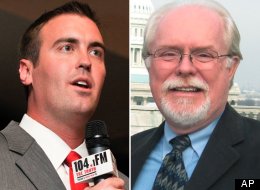 Appearing with Giffords at a Tucson hotel after his victory Tuesday night, Barber told supporters, "Life takes unexpected turns and here we are, thanks to you." Giffords hugged him and kissed his forehead.

Barber defeated Republican Jesse Kelly, who narrowly lost to Giffords in 2010 in a competitive district that Republicans have won in the last two presidential elections. Giffords has made few public appearances since resigning in January to focus on her recovery, but she dashed back to Tucson during the campaign's final days to help her former district director.

Democratic officials were quick to argue that the victory sets the stage for them to win back control of the House.

"This campaign previewed the message fight that will play out across the country in November: Democrats committed to protecting the middle class, Social Security and Medicare versus misleading Republican attacks on Obamacare and national Democrats, " said Rep. Steve Israel, D-N.Y., chairman of the Democratic Congressional Campaign Committee.

But Rep. Pete Sessions, R-Texas, the chairman of the National Republican Congressional Committee, said special elections are unique and the Arizona race was particularly so because of what had happened to Giffords. He predicted that Barber would not fare as well in the fall with President Barack Obama leading the ticket.

"No one wanted this election to happen or to see Gabrielle Giffords step down from Congress, but Jesse ran a campaign focused on pro-growth policies that will lead to less government and a strong and vibrant economy, " Sessions said.

In his concession speech, Kelly said: "We executed the plan we wanted. The voters of southern Arizona did something different."

Republicans had sought to make the contest a referendum on Obama and his handling of the economy. Democrats played to the senior vote by contending that Kelly would not protect Medicare and Social Security.

With 100 percent of precincts reporting, Barber won about 52 percent of the vote while Kelly had 46 percent.

Both candidates have promised to run for a full term in the fall, setting up a possible November rematch in a redrawn district that is friendlier to Democrats. Republican voters outnumber Democratic voters by about 26, 000 under the current map. That edge will narrow to about 2, 000 under redistricting.

Unfortunately she was a shoe-in. The only reports you will hear about are the races that are interesting.