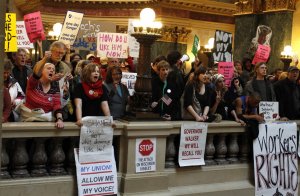 Democrats have taken down two state senators — Dan Kapanke (R), and Randy Hopper. They needed to win three races tonight to be able to back the state senate. Two Democratic state senators face recalls next Tuesday.

2:07 A.M.: Here’s my wrap-up on what happened tonight... er, yesterday. Thanks to everyone who followed along!

“She is once more tampering with the results of a consequential election and in the next hours we will determine our next course of action, ” said party chairman Mike Tate in a statement. “For now, Wisconsin should know that a dark cloud hangs over these important results.” A party spokesman added that “dirty tricks are afoot.”

Democrats are already suspicious of Nickolaus. In April, challenger JoAnne Kloppenburg appeared to have bested state Supreme Court Justice David Prosser until 7, 582 uncounted votes were found in Waukesha. That race also became a referendum of sorts on the state’s collective bargaining law.

The final race has not been called by the AP, but local news organizations have declared Darling (R) the victor.

12:07 A.M.: Darling is currently in the lead with most votes in from Waukesha County. Milwaulkee County has yet to finish reporting.

11:36 P.M.: Democrats have won a second state senate district — Oshkosh Deputy Mayor Jessica King (D) has beaten state Sen. Randy Hopper (R). King lost narrowly to Hopper in a 2008 race that went to a recount; this time around Hopper took hits not just for his voting record but for his messy divorce and relationship with a staffer.

11:09 P.M.: Democrats have their first win: The AP has called state Rep. Jennifer Shilling (D) the victor over state Sen. Dan Kapanke (R) in the 32nd district, which has been trending Democratic in recent years.

@Arshad Waqar: Request to All, pls dare to accept the results of elections and let ppl do their work to live for families also, nobody will came to feed, Tue, 13 October 2015 07:42 AM