The Midterm Election Story that Doesn't Fit the 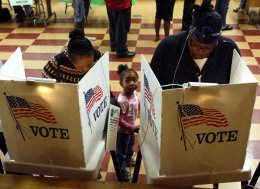 The media are spending enormous amounts of time and energy speculating over who’s responsible for the Democratic midterm rout—Obama, the Dems running from Obama, angry voters, apathetic voters—and clearly they all play a significant role. But barely a blip has been devoted to the one thing we actually do know diminished the Democratic, and especially the African-American, vote: the various forms of voter suppression that have been enacted into law in twenty-one states. As Ari Berman writes, based on number-crunching by the Brennan Center for Justice, “The number of voters impacted by the new restrictions exceeded the margin of victory in close races for senate and governor in North Carolina, Kansas, Virginia and Florida…”

But you won’t hear a lot about voter suppression; it doesn’t fit the dominant media narrative, which largely revolves around the personality of Barack Obama. In fact, in MSM circles it’s considered downright impolitic to link voter restrictions to election results.

US midterm elections 2014: as it happened