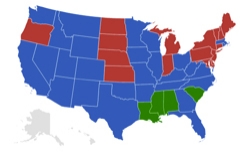 The race is close! Talking heads and voters chatter nervously about the prospect that the election contest will be settled in court. An Electoral College tie could yield a Republican president and a Democratic vice president. It’s tempting to think that this is just the American way: the fate of the country resting on a few battlegrounds. But today’s partisan strongholds were yesterday’s swing states, and winners have sometimes won handily. Below, Slate challenges you to demonstrate your grasp of presidential election history.

You’ll face 12 electoral maps, randomly generated from presidential elections since 1860. States are shaded according to the party of the candidate who won them: red for Republicans, blue for Democrats, and green for third parties or even splits. For each map, pick the proper election out of four choices before the timer runs out. Every correct answer is worth 45 electoral votes. Collect 270 to come out on top. Good luck!

The Polls Are In!

Time to pack for the White House!

Popular Vote and the Electoral College - by Dr. Larry Sabato

Time to eliminate the Electoral College?