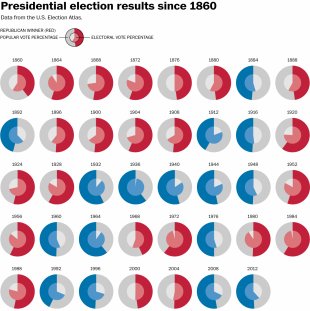 We know this, of course, having learned the lesson very clearly in 2000: The only thing that matters is the Electoral College. Yes, we all go to the polls and do our thing and, in cool states, get little stickers saying we voted. But our votes only sort of count. It's the electors who determine our president. And most of the time, the electoral-vote margin differs pretty dramatically from the popular vote.

There's an obvious reason for this: States split their votes but (with just two exceptions) not their electors. So if, say, Barack Obama wins 51.2 percent of the vote in North Carolina, he gets 100 percent of its 15 electors. 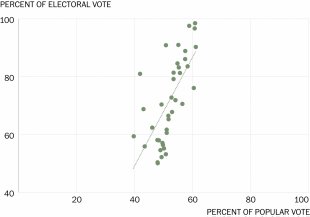 There have been repeated efforts in various states to link electoral votes proportionally to a state's popular vote, but usually it wouldn't make any difference. (If electors were tied to congressional district voting results, the only election since 1992 that would have changed would have been 2012.)

Still, there's an elegance to the relationship between the two metrics. Inspired by pie charts from the University of Connecticut's Roper Center, we used data from the U.S. Election Atlas to plot each presidential race winner's percentage of 1) the popular vote and 2) the electoral vote.

Notice that in many cases, the winner didn't surpass 50 percent of the popular vote. Since 1860, 25 of the 39 elections have had a winner that was supported by more than half of the voters.

Unsurprisingly, there's a rough correlation between percentage of popular vote and percentage of the electoral vote. But the key word there is rough.

That's because we're dealing with a fairly small sample size, and because the percentage difference between the two has been massive - a 40-point difference in 1980, for example - and it has also been tiny, like the two elections of George W. Bush.

But those tiny margins were more than enough to give Bush eight years in office. The outer ring on those pie graphs up there is the one we contribute to. The inner circle, as always, is the one that makes the difference.

Vote for Me! A look at the Electoral College using Coke ...

Four curious outcomes if the Electoral College ends in a ...

What the electoral college of Kansas?