Who would benefit most from changing the way the president is elected? 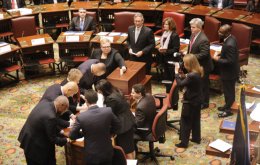 As broken as the American political system is, things could be a lot worse.

It is obvious the partisan divide has become a chasm, wide and growing wider. As the base within each party demands a more ideologically orthodox approach to policymaking it becomes more and more difficult to find ways to bridge the gap between Republican and Democrat.

It’s been a long time coming – but not that long. In just about a generation and a half the two major political parties have transformed into coalitions of interests largely organized, as conservative Grover Norquist has theorized, around the role of government in their individual lives; the majority of those in this still center-right nation essentially wanting to be “left alone.”

If the current demographic and geographic trends hold, however, things could become a lot worse. The 2014 election produced a kind of national Republican hegemony that may not be solely attributable to the Democrats having had a “bad election” thanks to the unpopularity of President Barack Obama and his policies. It may be that the national realignment some political scientists started to talk about in the 1980s after Ronald Reagan was first elected president has finally come about – with the south, much of the southwest, the plains, and the former states of the rust belt in GOP hands while the Democrats remain preeminent only on the west coast, the former Republican strongholds in New England, and the big cities.

Now, imagine the impact on the process of governing of two, three, or even four successive presidential elections where the winner of the popular vote – most likely the Democratic candidate – loses to the Republican in the Electoral College.

That’s not as far-fetched as one might think and would not require any political chicanery to pull it off. Simply by running up the vote in New York City, Los Angeles, Detroit, Chicago, Philadelphia and other urban centers where the Republicans are noncompetitive, the Democratic candidate for president could post a higher national aggregate vote total while failing to win a majority of electors in enough states to carry him or her to victory.

The Founding Fathers might argue that is the way the system is supposed to work. In the intervening years, however, so many Americans have grown up on the idea of “majority rule” in a democratic system (and are otherwise constitutionally illiterate) that the legitimacy of the national government would be imperiled. Further hamstringing the system is that, as far as Congress is concerned, the trends indicate the GOP – in the natural order of things and without having to gerrymander – will more likely than not control House and the Senate for some time to come as well as a considerable majority of state legislative chambers and governorships.

Anticipating the national paralysis this could cause, several reasonable proposals have been made to change the way presidents are elected without having to amend the Constitution, all of which are at least worthy of consideration.

Electoral College and the National Archives

Is the Electoral College Outdated?

What determined who the Colorado electoral votes went to in 2004?

A bill was submitted that year to change how the electoral votes count. However, that bill was not passed. More?

How many electoral votes does Colorado have?

Colorado has 9 electoral votes.
Colorado controls 9 votes in the U. S. Presidential and Vice Presidential elections of 2004 through 2020.