The Map: 11 Angles on the Electoral College 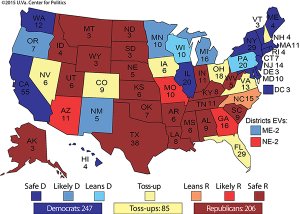 Earlier this week, we debuted our initial Crystal Ball Electoral College ratings in Politico Magazine . We’ve reprinted that column below for those who did not see it. As promised, we have elaborated on the map and our reasoning for the initial judgments. 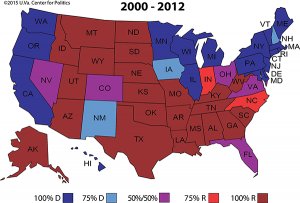 In our internal deliberations on these initial ratings we quickly agreed on a large majority of the ratings, which shouldn’t come as a surprise given the rigidity of the modern Electoral College.

We had some differences of opinion about the Leans Democratic states in the Midwest and the Northeast, as well as a handful of states that typically go Republican. For instance, we considered starting Pennsylvania and Wisconsin as Toss-ups to reflect how close they could be in a tight national election. However, given that both states have voted Democratic even in years when the Democratic nominee has lost (2000 and 2004), and because neither state has shown a clear pro-Republican trend in recent presidential elections, we could not justify portraying either state as a coin-flip to start.

We also debated what to do with Arizona, Georgia, and Missouri, states that have consistently voted Republican presidentially since 2000 yet have yielded very close results (Missouri) or have demographic trends favoring the Democrats (Arizona and Georgia). 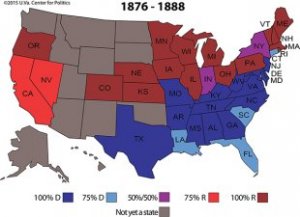 They are certainly not Safe R - or not the way they used to be, at least in the case of the latter two - but if the GOP nominee is losing any of them, he is almost certainly on his way to a large national loss. Therefore, Likely R is the logical place for them.

Indiana was easier. Barack Obama’s 2008 win was something of a fluke; it was only the second time since the end of the World War II that the state voted Democratic, and Mitt Romney strongly restored it to the GOP column in 2012. So we’ve started it as Safe R.

Finally, after a vicious argument that resulted in bloodletting, New Hampshire was designated Toss-up instead of Leans Democratic, for reasons we explain more fully below.

2. A rigid Electoral College map: We’ve had one before

As Map 2 shows, the Electoral College has been very stable over the past four presidential elections. Remarkably, 40 of 50 states have backed the same party from 2000 to 2012, a whopping 80%. Of the other 10 states, five have gone with one party 75% of the time and the other five have split their results evenly between the two parties in that period. We’ve discussed how much more rigid this map appears compared to previous periods. 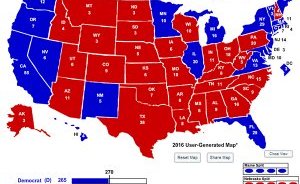 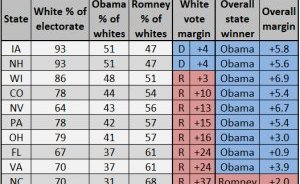 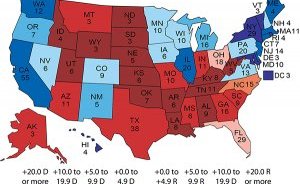 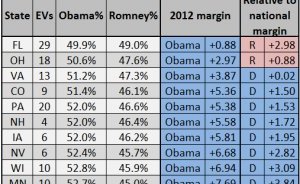 BATTLE FOR THE ELECTORAL COLLEGE!

An education about the Electoral College

Post-debate changes on the electoral map

If you look at that map that has been provided you count it up and a person can win with as little as 11 states.

On Electoral College maps what do red and blue states indicate?

Red states are those won by McCain (Republican). Blue states were won by Obama (Democrat)

@wwwCISorg @SenTedCruz Has anyone layered this over the Electoral college map to see if it changes voting? Thu, 8 October 2015 07:42 PM