Somehow, the message Hillary Clinton’s nascent presidential campaign took from 2014 is that the former secretary of state is a rising star and Democrats are winning the future. That is the inevitable takeaway from an interview Talking Points Memo’s Dylan Scott conducted with President Barack Obama’s former battleground states director for his 2012 campaign, Mitch Stewart.

According to this seasoned Democrat, Clinton can reasonably expect to expand on Barack Obama’s 2008 successes with minorities and do him one better as a result of Clinton’s appeal to working class white voters. In fact, Stewart says, Clinton can expect to flip red states in 2016 like Arizona, Indiana, Arkansas, Missouri, and Georgia to claim 382 votes in the Electoral College. 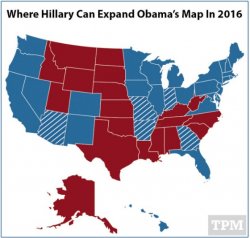 None of these states are likely to be the key 270th electoral vote, Stewart emphasized. The electoral tipping point is still likely to be the traditional battleground states: Iowa, New Hampshire, Virginia, Ohio, Colorado and Nevada. But if Democrats can make these other states competitive, it gives them more room for error and forces Republicans to expend resources in places that have traditionally been marked down as wins for them before the campaign even starts.

“If Republicans have to spend resources in Arizona and George to make sure that they win it, that means that they’re spending less resources elsewhere, ” Stewart said. “The further we can play into their field, the more money they’re going to have to spend playing defense in places they’ve normally taken for granted.”

Stewart’s outlook is a common one in the Hillary 2016 universe. The New York Times‘ Amy Chozick reported earlier this month that Clinton supporters have a term for it — the “New Clinton Map, ” which combines white working-class women with the Obama coalition to expand the electoral playing field.

Other top Democratic strategists, not as immediately involved in Clintonland, agree that they might be onto something.

The Washington Post’s Chris Cillizza calls this rather rosy appraisal of Clinton’s electoral appeal out for its “ridiculousness.”

It’s easy to assume — and the Clintons almost certainly are assuming — that the former first couple of Arkansas have a special connection to the Natural State. After all, Bill Clinton spent years as the state’s governor and used it as a launching pad for his presidential bid in 1992.

That was a very long time ago. And even in the past six years, Arkansas has moved heavily away from Democrats at the federal level. In 2008, both U.S. senators from Arkansas were Democrats, as were three of its four House members. Following the 2014 elections, all six are Republicans. ALL SIX. President Obama won just 37 percent of the vote in the state in the 2012 general election after watching someone named John Wolfe win 42 percent of the vote in the Democratic presidential primary against him.