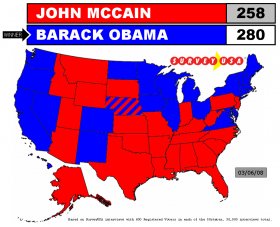 SurveyUSA interviewed 600 registered voters in each of the 50 states. A total of 30, 000 interviews were completed. If John McCain faces Barack Obama, Obama wins 280 to 256. McCain carries 26 states. Obama carries 24 states plus the District of Columbia … and then there is Nebraska, which divides its electoral votes based on which candidate wins each of the state’s congressional districts. McCain wins Nebraska 45% to 42%, but loses in two of the state’s three congressional districts, which results in Barack Obama taking two of Nebraska’s five electoral votes.

There are specific limitations to this exercise. The winner’s margin in each state is not always outside of the survey’s margin of sampling error.

Rather than show states where the results are inside of the margin of sampling error as “leaning” or “toss-ups, ” SurveyUSA for this illustration assigned Electoral Votes to the candidate with the larger share of the vote, no matter how small the winner’s margin. The Democratic nominee is not yet known. Running mates on neither side are known. These are not surveys of likely voters, these are surveys of registered voters. Those caveats stated, the exercise is a remarkable foreshadowing of how contested, and how fiercely fought, the general election in November may be, regardless of who the Democratic nominee is. And the exercise speaks to which states may vote one way or the other, depending on who the Democrats nominate.

2012 Prediction: How Many Electoral Votes Will Obama Get?
Related Posts

@Terri Soucek: Obama's plan to send illegals to certain states to gain the most electoral votes for that state to create one party dictatorship. Wed, 7 October 2015 05:51 PM