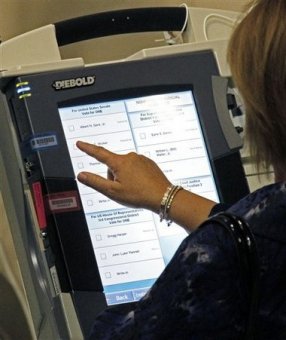 A voter prepares to cast her electronic ballot at this Madison, Miss., precinct, Tuesday, Nov. 6, 2012. After a grinding presidential campaign President Barack Obama and Republican presidential candidate, former Massachusetts Gov. Mitt Romney, yield center stage to American voters Tuesday for an Election Day choice that will frame the contours of government and the nation for years to come. (AP Photo/Rogelio V. Solis)

The number of Mississippi voters dropped from the 2008 presidential election by as much as 90, 000 people, with Republican votes falling twice as much as Democratic ballots.

In 2008, 1.29 million Mississippians voted, the most ever in a presidential election. Tuesday's turnout, still second-highest, fell 7 percent to 1.2 million. That gap could narrow as affidavit votes are counted and totals are certified.

There were hints that voting would go down. The number of registered voters in the state had fallen 4 percent since 2008 to 1.89 million.

Months before 2012's election, analysts speculated Republicans were more eager to vote than Democrats, calling it an enthusiasm gap. That speculation faded on the national level as voting approached, but the expectation still lingered that Mississippi would trend more Republican than in 2008

"I certainly anticipated that, " said state Sen. Chris McDaniel, R-Ellisville. "It appears we may have an enthusiasm gap of our own."

Obama won 43.7 percent of the vote in Mississippi. While that's not close to victory, it's the second-best performance of any Democrat in the last eight election cycles. Only better was the 44.1 percent of Mississippi ballots that Bill Clinton garnered in his 1996 re-election win.