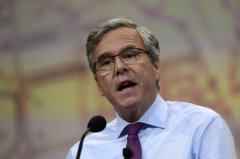 COLUMBUS, Ohio - Many would-be presidential contenders spend most of their exploratory phase just visiting Iowa, New Hampshire, South Carolina and maybe Nevada, over and over again.

But not Jeb Bush.

In recent weeks, the former Florida governor - who insists that he's still "considering the possibility" of running - has spent considerable time in states that usually earn the attention of a general election candidate, at the expense of time in states that matter early in the GOP primary process.

Of course, Bush is on his way back to New Hampshire on Thursday and he's expected to visit South Carolina again next month. He's already visited Nevada, Iowa, New Hampshire and South Carolina once each. But he's also made stops in Michigan, Illinois, Georgia, Pennsylvania, Colorado, Massachusetts, Maryland, the District of Columbia, Tennessee, California and New York to raise money, give speeches or hold campaign-style events.

On Tuesday, he added Ohio to his list - a critical battleground state where the Republican governor, John Kasich, is also thinking about running for president.

Kasich traveled to Detroit on Monday and said he's "seriously considering" a run. This week he's visiting South Carolina and New Hampshire, where he'll appear at a GOP-sponsored summit with other potential candidates.

Bush made no direct reference to Kasich while in Columbus - and dodged questions about whether he'd ever select him to be his running mate.

"I called and told him I was going to be here, I wanted to make sure he knew that. He knows I'm around, " Bush told reporters.

In a recent poll of Ohio Republicans by Quinnipiac University, Kasich led with 20 percent support – an 11-point advantage. Bush trailed farther behind, tied in fifth place with former neurosurgeon Ben Carson, at 8 percent.

On Tuesday, Bush was the keynote speaker at an annual meeting of the Ohio Chamber of Commerce and spoke broadly about his plans to reshape the American economy. He voiced support for hydraulic fracking - a growing industry here that employs roughly 200, 000 workers - but he also reiterated his support for immigration reform.

"If we're going to be young and dynamic and aspirational again, why not use one of the tools that we have that are uniquely American: The ability to absorb people in a legal immigration system and allow them to participate in the American dream?" he said.

"Fixing a broken immigration system would be part of an economic strategy, " he added later. "It would be as though we would have the chance of having the first half a million first-round draft picks. We're the Tampa Bay Bucs and we've got the first round draft pick but then we've got 500, 00 more and we've got it every year. Don't you think we would grow more dramatically if we were more strategic on how we dealt with immigration?"

How much sway will IMF have after upcoming general election?

Do citizens of Washington, D.C. vote in the general presidential election

Yes citizens of Washington D.C. do vote in the general presidential election.