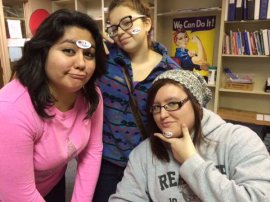 While Washington awaits the decision of its adult voters in this fall’s General Election, more than 18, 000 K-12 students statewide already have indicated via this week’s Student Mock Election what they think of the three initiatives on the statewide ballot.

Students approved Initiative 1351 (reducing class sizes), as 51.3 percent gave a thumbs-up. Students provided a split decision on the two initiatives on gun background checks. Nearly 55 percent rejected I-591, which would prohibit government agencies from requiring background checks on firearms recipients unless a uniform national standard is required. But more than 68 percent approved I-594, which calls for a universal background check on gun purchases.

Students also voted on their congressional race. Among the 10 congressional contests in Washington, the 4th District battle between Republicans Dan Newhouse and Clint Didier was the closest, as 50.3 percent (991) students there voted for Newhouse, while 49.7 percent (979) chose Didier.

“It’s great that so many students voted in the Mock Election this year and experienced what voting is like, ” said Secretary of State Kim Wyman. “The Mock Election is an excellent way to introduce students to voting and why it’s important.”

The Mock Election, held online, began Monday morning and ended early Friday afternoon. The annual civics program for Washington students has been conducted by the Office of Secretary of State since 2004.

@Robert Holley: If voting was equal and boundaries was fair in local and state elections. The US of A would not have problems it's currently having. Tue, 13 October 2015 01:10 AM