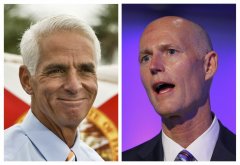 Florida Gov. Rick Scott (R) and former governor Charlie Crist (D) easily won their primary elections Tuesday, advancing to a general election showdown that is expected to be one of the nastiest and most expensive campaigns in recent history.

Faced with only nominal competitors, both were declared victorious not long after the polls closed Tuesday evening. Crist had no trouble getting past Nan Rich, a former state senator. Scott breezed by Puerto Rican Chamber of Commerce of Florida founder Elizabeth Cuevas-Neunder and pharmacist Yinka Adeshina.

With exactly 10 weeks to go until the election, Scott and Crist officially kicked off a bitter confrontation that has effectively been underway for months. Republicans have been trying to cast Crist, a former Republican and independent, as a shape-shifting opportunist. Democrats have portrayed Scott as an extremist and ineffective leader. Scott’s campaign spending could top $100 million. 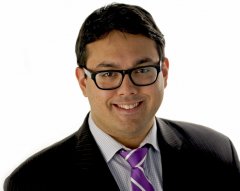 Florida was one of four states where voters went to the polls Tuesday. In Arizona, they pared down the field in the first open governor’s race in 12 years. In Oklahoma and Vermont, lower-profile contests were being settled.

Ducey, a former Cold Stone Creamery chief executive, was backed by numerous national tea party leaders including Sarah Palin and Sens. Ted Cruz (R-Tex.) and Mike Lee (R-Utah). Smith, a more moderate Republican, had Brewer’s backing. The governor campaigned hard for him in the closing stage of this race.

A handful of primaries in U.S. House districts in Arizona were also under close watch by national political strategists.

In the 1st district, where Democratic Rep. Ann Kirkpatrick is vulnerable, state House Speaker Andy Tobin, the choice of the GOP establishment, was running slightly ahead of rancher Gary Kiehne and state Rep. Adam Kwasman, with about a quarter of the vote tallied. Most strategists considered Kwasman and Kiehne less electable choices.

The Why of the 2014 Florida Election Disaster

RT @MatthewLumby: @BernieSanders Surely the key general election sites are Florida and Ohio. Hard to see how you would do better than Hilla… Tue, 6 October 2015 08:35 PM