Why Alaska's Election Results Are Taking

Neither the Alaska Senate race nor the Alaska gubernatorial race have been called - and both may take a while.

Here are seven questions and answers about why patience is a virtue when it comes to the Last Frontier: 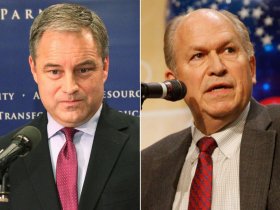 Alaska Gov. Sean Parnell speaks at a news conference Juneau on Jan. 23, 2014 and gubernatorial candidate Bill Walker participates in a debate in Anchorage on Oct. 24, 2014.

Isn’t the election over?

Yes, the election was Tuesday, but we may not have an answer to the questions of who is the new Senator and Governor from the Last Frontier for weeks because there are still votes to be counted and that won’t start until next week. According to Gail Fenumiai, the director of the Alaska Division of Elections, there are 23, 271 early and absentee ballots deemed eligible for counting. These are already received and reviewed as eligible. They sent out another 12, 541 absentee ballots and if postmarked by November 4th, ballots can arrive legally 15 days after the election and still be properly counted. Of course, they have no idea how many of those will be returned.

How long is this going to take?

We don’t know exactly, but here’s what we can tell you: There are also an unknown amount of provisional ballots, which are ballots that may have been cast at an incorrect polling location or if a poll monitor couldn’t find a voter’s name, amongst other possible irregularities. In 2010, there were about 13, 000, but they have no idea if the number will be the same. The ballots are currently being reviewed for eligibility. There are also an additional 2, 651 statewide early votes that remain to be counted. On top of those votes, there are absentee ballots coming in daily from Alaska’s over 200 in-person voting locations. Some that arrived before Election Day have been counted, but none of the ballots coming in from as many as 120 rural communities have been tabulated yet. The number of those are completely unknown. In addition to these ballots there are about 2, 000 urban early votes that have yet to be counted. They will be counted on November 11th, 14th, and then from the 17th through the 19th if necessary. Remember in Alaska, absentees are sent in from remote locales so these races may not be called for quite a while.