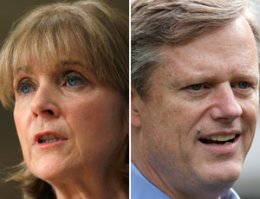 Attorney General Martha Coakley has a 41 to 26 percent edge on the leading Republican, Charlie Baker, in a head-to-head contest. (AP)

BOSTON Attorney General Martha Coakley maintains a solid lead in a gubernatorial race that appears to be making little impression on Massachusetts voters, according to a new WBUR poll.

Coakley leads her closest Democratic competition, Treasurer Steve Grossman, 45 to 14 percent in a primary match-up. She has a 41 to 26 percent edge on the leading Republican, Charlie Baker, in a head-to-head contest.

But at this early stage in the race, broad swaths of the electorate know little about most of the candidates.

“I think a poll, you know, in March of an election year is really a reflection of name recognition, ” said Peter Ubertaccio, a political scientist and director of the Joseph Martin Institute for Law & Society at Stonehill College.

The poll of 500 likely voters conducted by MassINC (topline, crosstabs) shows 94 percent of voters are familiar with Coakley, a two-term attorney general who lost a high-profile U.S. Senate race to Republican Scott Brown in 2010.

Six in 10 voters know Grossman and 74 percent are familiar with Baker.

Independents Jeff McCormick and Evan Falchuk are not well-known either.

At the moment, the Democratic race is largely focused on party activists, who will gather for the Democratic state convention in June. Candidates must win the support of 15 percent of convention delegates to qualify for the primary ballot in September.

Grossman has been taking shots at Coakley in recent weeks, suggesting she’s shifted positions and is not sufficiently liberal to be the Democratic nominee.

The message may appeal to the party insiders who will gather for the convention in Worcester, but it does not seem to be having any impact on the broader electorate.