On November 5, 1968, the Republican nominee, former Vice President Richard Nixon won the election over the Democratic nominee, Vice President Hubert Humphrey. Nixon ran on a campaign that promised to restore "law and order". Some consider the election of 1968 a realigning election that permanently disrupted the New Deal Coalition that had dominated presidential politics for 36 years. It was also the last election in which two opposing candidates were vice-presidents.

The election also featured a strong third party effort by former Alabama Governor George Wallace. Because Wallace's campaign promoted segregation, he proved to be a formidable candidate in the South; no third-party candidate has won an entire state's electoral votes since.1 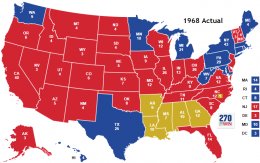 Presidential elections with 270 to Win