Latino Voters in the 2012 Election 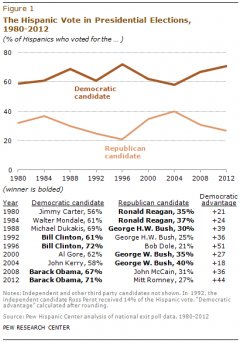 Latinos voted for President Barack Obama over Republican Mitt Romney by 71% to 27%, according to an analysis of exit polls by the Pew Hispanic Center, a Project of the Pew Research Center.

Obama’s national vote share among Hispanic voters is the highest seen by a Democratic candidate since 1996, when President Bill Clinton won 72% of the Hispanic vote.

Hispanics made up a growing share of voters in three of the key battleground states in yesterday’s election—Florida, Nevada and Colorado.

The state’s growing non-Cuban population—especially growth in the Puerto Rican population in central Florida—contributed to the president’s improved showing among Hispanic voters. This year, according to the Florida exit poll, 34% of Hispanic voters were Cuban while 57% were non-Cuban. Among Cuban voters, the vote was split—49% supported Obama while 47% supported Romney. Among the state’s non-Cuban voters, Obama won 66% versus 34% for Romney.

Top Issues for Hispanic Voters in 2012

For Hispanic voters, according to the national exit poll, 60% identified the economy as the most important issue (of four listed) facing the country today, virtually the same as the share (59%) of the general electorate that identified the economy as the nation’s most important issue. On the other three issues asked about, for Hispanic voters, the economy was followed by health care (18%), the federal budget deficit (11%) and foreign policy (6%).

Demographics of the Latino Vote

Among Latino voters, support for Obama was strong among all major demographic sub-groups. Yet some differences were evident. According to the national exit poll, Hispanic women supported Obama more than Hispanic males—76% versus 65%.

@hahussain On 4 January 2004 Mikheil Saakashvili won the presidential elections in Georgia with more than 96% of the votes cast Wed, 14 October 2015 03:46 AM