Voter turnout in 2014 was the lowest since WWII 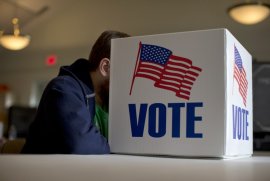 General election voter turnout for the 2014 midterms was the lowest it's been in any election cycle since World War II, according to early projections by the United States Election Project.

Just 36.4 percent of the voting-eligible population cast ballots as of last Tuesday, continuing a steady decline in midterm voter participation that has spanned several decades. The results are dismal, but not surprising - participation has been dropping since the 1964 election, when voter turnout was at nearly 49 percent.

This year, Maine boasted the highest turnout in the nation, with 59 percent of the eligible population submitting their votes. Indiana had the lowest turnout rate, with just 28 percent of eligible voters participating.

Republicans won big on Tuesday night – as much as by who actually voted as who didn't. Here are the takeaways from the exit poll data. (Pamela Kirkland/The Washington Post)

Low Turnout of Youth in US 2012 Presidential Election

The Latino Voter in the 2012 Presidential Election

What was the voter turnout for the presidential election?

62% of eligible voters voted in the 2008 Presidential election. It was the highest turnout since the 1960s.