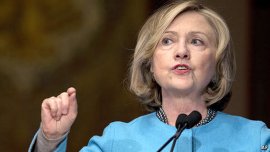 THE field of Republican presidential contenders may be limited to a narrow range of conservative fellows in mid- to late-middle age, but at least there are a lot of them. The Democratic field is, for all practical purposes, Hillary Clinton.

Ahead by an average of 49 points in early polls, it is not clear that Mrs Clinton has any serious competition. There is some sign that Joe Biden might jump in, but his poll numbers are dismal for a second-term vice-president. Martin O'Malley, Maryland's former governor, might run. Jim Webb, a former Virginia senator, is a possibility. Bernie Sanders of Vermont, the Senate's loveably irascible socialist, might take the opportunity to speak truth to weary beat reporters. As for Elizabeth Warren, no amount of valentines has wooed her away from her position on not running (though as our Lexington recently noted, her denials are always in the present tense).

There was an air of inevitability about Mrs Clinton early on in the 2008 race, too. However, Barack Obama was, and is, a rare political talent. If anyone comparably gifted is perched on the Democratic bench, his or her light has been kept well hidden. Democrats like to cast Republicans as out-of-touch fuddy-duddies, but the Democratic field, as it now stands, is remarkably long in the tooth, with an average age of 69. The GOP field averages a relatively youthful 57. Where are the Democrats in their avid middle years longing to play on a national stage, labouring now to lay the groundwork for a big run down the road? When the payoff is huge, it can make sense to play even when the odds are slim. Ted Cruz knows he probably won't win this year, but he is bold enough to give it a shot. Why so little intrepid ambition among the Democrats? Mr O'Malley, we salute you.

One partial explanation of the thin Democratic field is that rising talent has been recently nipped in the bud. The past two mid-term elections saw Democrats lose control first of the House in 2010, and then of the Senate in 2014. Meanwhile, Republicans have been taking over statehouses and governorships at a swift rate. Democrats who might have been up and comers came and went.

@Рудольф Алексеев: Regardless of how the primaries go I think Democratic ticket will have the names Clinton and Sanders on it. Thu, 15 October 2015 08:22 AM

RT @spacetime89: @Franklin_Graham What we need is an intellectual awakening and a political revolution. Vote for Bernie Sanders in the Demo… Thu, 15 October 2015 06:04 AM