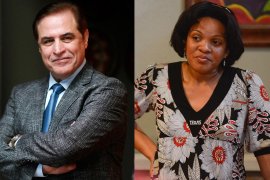 Addressing a group of veterans recently at a Mexican restaurant in El Paso, David Alameel spoke like a candidate with only one opponent: Republican U.S. Sen. John Cornyn. It was only after Alameel was asked by a reporter about Kesha Rogers, his opponent in the May 27 Democratic primary runoff, that he spoke directly about her.

“Somehow she managed to get 22 percent, ” Alameel said. “There must be people who don’t know what she stands for.”

Alameel is hoping the combination of his financial resources and the support of prominent Democrats like state Sen. Wendy Davis, who is running for governor, will lead to victory against Rogers, whose unorthodox views include support for impeaching President Obama. Yet Rogers argues that she is being underestimated and that the voter support she has received is a sign of dissatisfaction among Texas Democrats with their party’s direction.

Rogers describes herself as a Democrat in the tradition of Franklin D. Roosevelt and John F. Kennedy. In her opinion, Obama and virtually every elected Democrat in Congress and in Texas represent a subversion of those historic ideals. She rarely delivers a speech without advocating the impeachment of Obama, a photo of whom appears on her campaign website with a Hitler mustache added.

“Obama is right in line with the Republicans as he’s supporting Wall Street financial interests, as he’s supporting this drive toward thermonuclear war, and as he’s destroying the physical economy of this nation, ” Rogers said during a recent speech in Houston.

Like her mentor, the controversial activist Lyndon H. LaRouche Jr., Rogers’ views defy simple categorization. She said she sought to “bankrupt Wall Street” by reinstating Glass-Steagall reforms that blocked commercial banks from engaging in investment services. She spoke favorably of Russia’s annexation of Crimea and accused Obama of encouraging “Nazi” forces in Ukraine. She hopes to replace his health care reform with a single-payer system. She favors nuclear fusion development over alternative energy sources, including solar and wind, which she called part of “the genocide policies” of Obama and Wall Street bankers.

The Texas Democratic Party, which typically avoids endorsements in primaries, is rallying behind Alameel, a businessman who developed and sold a chain of successful dental clinics and who has invested more than $4 million of his money in his campaign. On the campaign trail, Alameel is emphasizing his support for a full withdrawal of troops from Afghanistan and his view that Cornyn is out of step with Texas values.

Who really won the Texas Democratic primary and caucuses?

2) It is when you vote for a certain Dem. you want to represent the party at the real elections.( Seemingly this year it will be Obama vs McCain)
3) 18 and have to be a registered Democrat.
4) Hillary vs Obama already happened, (I'm waiting for Obama vs McCain!)
A little bonus: The Dem. primaries will be held on March 4th

Who will win the Texas Democratic Primary? | Yahoo Answers

2) It is when you vote for a certain Dem. you want to represent the party at the real elections.( Seemingly this year it will be Obama vs McCain)
3) 18 and have to be a registered Democrat.
4) Hillary vs Obama already happened, (I'm waiting for Obama vs McCain!)
A little bonus: The Dem. primaries will be held on March 4th