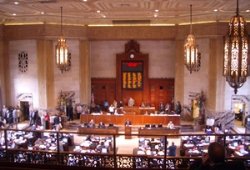 The one in charge of elections, Sec. of State Tom Schedler, as do many observers, note the decline in registrations for Democrats and growth among Republicans and even more in the catchall Other classification, which includes all registrants of the minor recognized parties Greens, Libertarian, and Reform, all registrants that put down another label of an unrecognized party, and those that indicated no partisanship.

He offered two theories as to why the Other category has grown the fastest – it’s gone from 18 to 26 percent of the electorate since 2000, while GOP registrants have increased only from 22 to 28 percent and Democrats fallen from 60 to 46 percent – which are somewhat complementary. One is “frustration with the major parties” and the other the participation opportunity the electoral system presents; each merits some discussion.

The frustration hypothesis actually serves as a corollary to a larger concept, called dealignment. Scholars have argued that for at least six decades, and probably longer since survey research that could detect the phenomenon only came into existence around the World War II period, that voters increasingly have deemphasized partisan appeals in organizing their political worlds and basing their decisions within it. A number of sociological and technological changes have spurred this, leaving a more rootless electorate than ever not housed fairly permanently in one major party. As parties become less needed as intermediaries to understand and act in the political world, it becomes easier to question them and their utility for making vote choices, and thereby reduced willingness to affiliate with them.

@Sarah Cox: just told soph how to register to vote for her state, the deadline, & that her state is a semi-closed primary because i LUV democracy okay Wed, 14 October 2015 04:00 AM