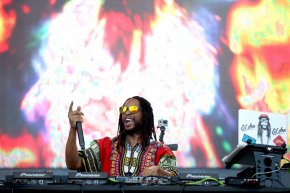 Rapper Lil Jon had a longer commute than most voters to his polling place: a cross-country flight from Los Angeles to Georgia.

The “Rock the Vote” spokesman, who recently recorded a get-out-the-vote video riffing on his hit “Turn Down for What, ” posted on Instagram this morning about his journey, claiming he was making the trip because he was never sent an absentee ballot even after “numerous calls.”

And it didn’t take long for advocates to seize on his voter woes as evidence of bigger problems. ColorOfChange.org executive director Rashad Robinson released a statement tying them to glitches in Georgia’s Web site providing poll locations and recent claims of voter registration fraud.

“Most Georgia voters do not have Lil Jon’s resources or flexibility to chose to return home to vote on Election Day, ” Robinson said, blaming the problems on Georgia Secretary of State Brian Kemp. “It is unacceptable — particularly with so many close races — that thousands of Georgians are being denied the freedom to vote because of Secretary Kemp’s inability to effectively administer this election.”

UPDATED 11/04 3:21: A spokesman for Georgia Secretary of State Brian Kemp tells us that Fulton County officials, not Kemp, were responsible for getting Lil Jon his absentee ballot, and that his office has opened up an investigation into the rapper’s case. “We’ve been in touch with people who work for [Lil Jon], ” said spokesman Jared Thomas. “Obviously, he was able to vote, but the poor guy had to fly all the way across the country. We have opened up an investigation into this specific case.”

UPDATED 11/04 4:12 pm: Rick Barron, Fulton County’s director of registration and elections, says the ballot’s in the mail. His office received Lil Jon’s request on Friday, Oct. 24, and sent him a ballot on Mon., Oct. 27. “He had six months before the election, and unfortunately, he waited until the end of that period, ” Barron tells us. “It’s probably going to show up when he gets back.”

Voters Cast Their Ballots for the Next L.A. County Sheriff ...

RT @BillPostOregon: #motorvoter because the "barriers" to voting when you get ballot in mail are so huge. Oregon and now California are so … Thu, 15 October 2015 08:26 AM