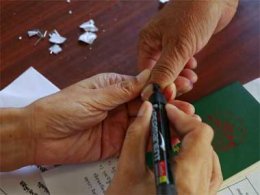 Kolkata:Apparently under pressure from political parties in the wake of violence-marred civic polls, West Bengal State Election Commissioner SR Upadhyay on Tuesday resigned even as counting of ballots is yet to be taken up.

Upadhyay submitted the resignation to Governor KN Tripathi at the Raj Bhavan.

Asked whether he asked Upadhyay not to resign, Tripathi replied in the negative.

To a question whether the resignation was unfortunate, the Governor said, "You can make your own comment. I should not give my comment on it. He (Upadhyay) has resigned and that is a fact."

On violence during the civic polling on 3 October, he said, "if any one has grievance, there are remedies. It is not appropriate for me to comment on it."

Upadhyay came under criticism from both ruling Trinamool Congress as well as opposition parties in the wake of Saturday's civic polls to Bidhannagar and Asansol which were marred by violence and malpractices.

Opposition parties, including CPI(M)-led Left Front, BJP and the Congress have demanded fresh elections to Bidhannagar, Asansol and Bally under Howrah Municipal Corporation while Trinamool Congress demanded counting of votes on 7 October as scheduled.

Under mounting pressure, SEC had at first postponed the date of counting on Sunday but on Monday decided to hold the exercise on 9 October.

TMC had staged a dharna in the Commission's office on Monday in which two state ministers Partha Chaterjee and Subrata Mukherjee and city Mayor Sovan Chatterjee demanded counting of ballots on 7 October.

Disapproving dharnas by political parties in the Commission's office, Upadhyay had said that "in the history of Election Commission, I have never heard of such protests like this."

@Good_Governance: #Constitution says a state election commissioner can be removed only by parliament by impeachment. Then how his appointment can be temporary Fri, 9 October 2015 02:08 PM